To perform bodily functions the body needs to create energy. Inside our cells, tiny organelles called mitochondria, take fat and other nutrients and turn them into usable sources of energy. This conversion process requires the presence of CoQ10.

CoQ10 is not only necessary for producing cellular energy, but also for defending cells from damage caused by harmful free radicals.

These two forms signifies the ability to accept or donate electrons which is a critical feature in its biochemical functions that cancel out free radical damage.
As we get older regular ubiquinone based CoQ10 supplements do not provide much benefit to the body. After the age of 30 the body ability to convert ubiquinone into ubiquinol reduces.

The natural un-oxidized, bio-active, ubiquinol version of CoQ10 supplements are put directly to use in the body. As there is no conversion required the bio-active form is absorbed and utilized much more efficiently at any age.
As a powerful antioxidant, CoQ10 can increase the absorption of other essential nutrients. It’s been shown that it helps recycle vitamin C and vitamin E, further maximizing the effects of vitamins and antioxidants that are already at work in the body.

Although the body has the ability to make CoQ10 on its own, but production naturally declines as we age — just when we need our cells to help defend us most.

Coencine is a 100% natural bioactive version of CoQ10. 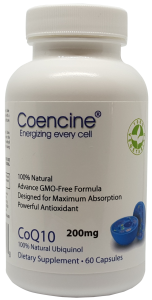 Try it and be Amazed !